The first key to this recipe is the rub. I have given you the ingredients I used in the below recipe, but feel free to do your own thing! Just make sure that: (1) you use enough salt (1 tsp salt per pound of brisket), (2) you let it rest (refrigerated) for at least 2 hours or, preferably, overnight, and (3) you let the brisket stand at room temperature for one hour prior to cooking.

The second thing that makes this brisket so amazing is the bath of bourbon, Guinness, beef broth, soy, balsamic vinegar, and lots of yummy herbs and veg. Just make sure you get a good sear on both sides of the brisket before putting it in the “booze bath” and starting it to braise.

Okay, but TRULY, the absolute icing on the cake … or in this case, the glaze on the brisket … is the Emily G’s Datil Peach Marmalade glaze. The sweet peaches, tart tangerines, and spicy hot datil peppers that make up this marmalade are the perfect accompaniment to the savory bourbon braised brisket. Put ¼ cup of the (strained) in a blender with ½ cup of Emily G’s Datil Peach Marmalade, a couple teaspoons of bourbon, and a pinch of salt and pepper. Pulse it until well combined and smooth and you have your glaze! Brush a generous amount over the fatty side of the brisket and pop it under the broiler for a couple of minutes to caramelize. You’ll still have plenty of the glaze left over to put in a bowl and pass around with the sliced brisket.

This recipe is so easy and delicious! Don’t believe me? Try it yourself. Here you go …

Mix all ingredients in a small bowl.

Rub brisket all over with spice rub. Cover and chill for at least 2 hours or, even better, overnight. Let stand at room temperature for 1 hour before continuing.

Preheat oven to 325°. Heat 1 tablespoon oil in a large, wide, oven-safe pot over high heat. Add brisket, fat side down. Cook undisturbed until well browned, 5–6 minutes. Turn brisket over and cook until browned, about 3 minutes. Using tongs, transfer to a plate. Reduce heat to medium and add remaining 1 tablespoon oil. Add onion and garlic. Cook, stirring occasionally, until onion is slightly golden, about 5 minutes. Add broth and all remaining ingredients. Bring liquid to a simmer. Return brisket to pot. Cover and transfer to oven.

Braise until brisket is very tender to the touch but still holds its shape, about 4 1/2 hours. Using a large spatula, transfer brisket, fat side up, to a large plate. Strain braising liquid into a large bowl. Return liquid to pot, bring to a simmer, and cook until reduced to 2 cups, about 15 minutes. (Note: Depending on how much the liquid reduced on its own during braising, you may not need to reduce and further.) Score fat side of brisket by cutting a cross-hatch pattern of 1/4"-deep slits spaced 1/2" apart. Return brisket, fat side up, to pot with reduced braising liquid.

Transfer 1/4 cup braising liquid to a blender. Add marmalade and bourbon and purée until smooth. Season with salt and pepper.

Preheat broiler. Spread 3–4 tablespoons glaze on top of brisket with the back of a spoon. Broil brisket in pot until browned and glazed, watching carefully to prevent burning, 4–5 minutes.

Transfer brisket to a cutting board. Slice against the grain and transfer to a large platter. Ladle braising liquid over. Drizzle remaining glaze on top. 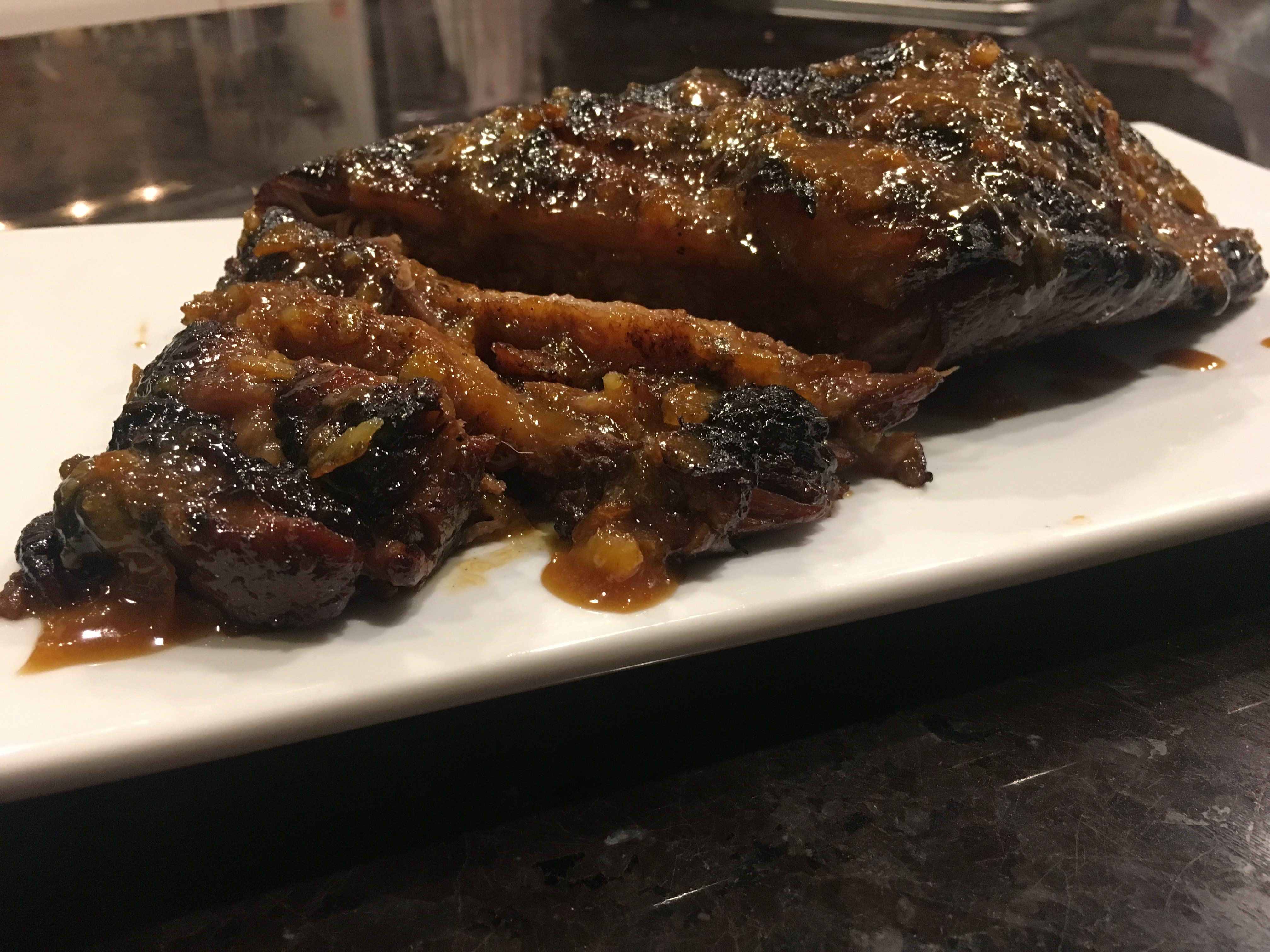